In conjunction with Singapore Maritime Week, NBAS is hosting a special insights panel on decarbonization in the maritime sector, in partnership with the Singapore Maritime and Port Authority (MPA), the Norwegian Embassy and Innovation Norway. Yara is our gold sponsor for the event and will share their journey towards a more sustainable shipping industry with green ammonia.

What is green ammonia?

To understand the role of green ammonia, we must first look to ammonia. Today, the world is already dependent on ammonia for nutrition. Because it is an important component of mineral fertilizer, around half of the world’s food production depends on it. However, ammonia only accounts for 5% of the world’s gas consumption. When Yara makes ammonia from renewable energy, it will not only decarbonize food with green fertilizer, they will also decarbonize fuel for shipping.

Simply put, ammonia is created by combining power (gas or other source) with water, which results in hydrogen and nitrogen. From there, we have NH3, also known as ammonia. If we swap the gas, which is currently the most frequently used power source, with renewables, we have green ammonia.

The role of Yara

Yara is uniquely positioned to produce green ammonia, with leading positions across production, shipping and distribution. They are currently running a pilot in a number of countries, including Norway and Australia. In Norway, they are planning to electrify its ammonia plant, which is estimated to reduce CO2 footprint with 800 000 tonnes per year. To capture growth opportunities within green hydrogen and ammonia production, transportation and distribution, they are establishing a new Clean Ammonia unit. 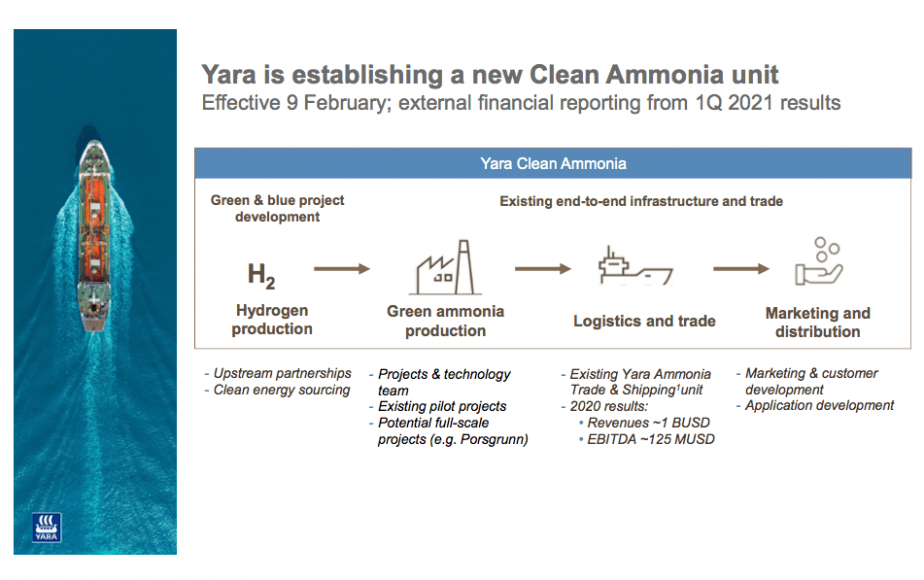 The largest barrier facing green ammonia production is the fact that renewables are still significantly more expensive than gas. Moreover, creating ammonia requires a lot of electricity. It is therefore vital that the price of green energy sources drop. However, according to Yara, this is possible. Because ammonia is the best suited hydrogen energy carrier, it is attractive to a large market of potential buyers.

The private sector is already making impressive steps towards green ammonia production. The Green Hydrogen Catapult initiative was recently launched, with the aim of increase the production of green hydrogen 50 times over the next five years, which would significantly reduce costs. However, there is still need for subsidies and over-all investment. With cross-sector alliances, we can reduce our dependence on fossil fuels, decarbonize food, enable the green hydrogen economy and create a multi-billion-dollar market for green energy.

Narasimha has been with Yara International for more than two decades. He has has been working in different functions and regions, but is now heading the manufacturing, supply chain and operational excellence for Asia and Africa.

NBAS is collaborating with upcoming artists in Singapore and Norway to showcase their work, while we get a creative take on our graphic profile. In April 2021, NBAS features Doodle twins. Learn more here and purchase their art here.